By Victor A. Charlo 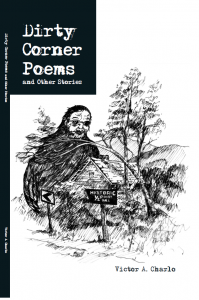 “I cut to the quick” says Vic Charlo about how he approaches his writing, “and mostly write about things that are Native because that’s what authentically grounds me.” Dirty Corner Poems and Other Stories, released the year Charlo turned 80, reveals, with a storyteller’s rhythm and effortlessness, life events that reveal character dilemmas and raise ethical questions we can all relate to, further aligning Vic with a greater responsibility to justice for All. (Vic was a civil rights leader in the early 60s via the Poor Peoples’ Campaign.) Rather than head off to join the deeper complexities of the Cause, Vic stayed on the Rez and raised his children with the traditions of his tribe. He made a family, became an educator, principal, counselor, lover, friend in his one true Home, on the Flathead Rez. He stumbles in dark places with doubts through and after divorce, yet comes out the other end to tell various tales of a true warrior.

This second collection from the Native elder, Charlo, comes mostly from re-surfaced journals Vic kept after he began pursuing his degree at University of Montana onward. At the time, he was living at a real place on the edge of Arlee, MT, off Highway 93 S called Dirty Corner, a house that became a reservation landmark to many as a healing, wacky, communal haven amidst the chaos of the times. The book’s poem, “Takeover,” is a great metaphor for a sense, at that time, of the outside world gone awry, where Rez babies have taken over the Corner, for better or for worse, from the adults.

One of the stories included is Vic’s touching lament, “Regretful News,” about a very young Vic hearing the news of his older brother, Charles, KIA at Iwo Jima, during WW II, an event that would transform him and his family forever.

Dirty Corner Poems and Other Stories is revealing of a sensitive and conscientious man who experiences unrequited love. The poems honestly pinpoint lost and gained understandings of true calling and commitments. Using the style of letter poems (where a poem begins, “Dear Wanda…” etc.), we are given an intimate window into the struggle Vic has living with his own complex choices.

The collection refers often to Vic’s reflection on his choices: They ask me to go to Wounded Knee/but I say I am helper here at home . . . weighing the value of his advocacy work as a civil rights leader. So much of his White Man learning, including seminary study, has contributed to him losing touch with his own traditions.

The poem “Cycles” in his first collection, Put Sey, says, What comes to mind when/ I think about the future is going home to old/ ways. Some think of the old ways as going/ back. I don’t…Our lives are not linear; they are cyclical.

Like a true spiritual elder and sage, Charlo’s second collection cycles back around, and repeats a common, yet wise concept: We always come back to where we are. Charlo is a World War II baby, the son of a Chief, and a rebel with a Cause (if not more than one Cause). This collection makes me happily NOT want to think in the White Man’s world of straight or linear lines. Dirty Corner Poems and Other Stories makes me think hard on my own purpose.

I’ll take space, any day, over one straight line, to better figure out who I am, and how to serve this life. Anyone who reads this book can thank Vic for guiding the Way, with his brave words, and even braver, a celebration of the ‘bending’ trials we all endure, making us all imperfectly glorious in our own humanity.